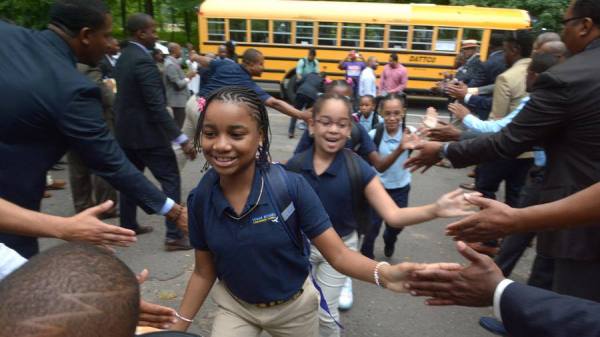 Back-to-school motivation from some dapper Dans as kids enter first day of school.

Go shawty…it’s a school day…we gonna cheer ya on while you stud-yyy.

Okay, that’s likely not what nearly 100 black Hartford, CT-based businessmen were chanting as local kids attended their first day of school on Tuesday.

The kids–mostly from single-parent homes–were greeted by a tribe (it takes a village, remember) of lawyers, cops, politicians, artists, activists commemorating the back-to-school milestone with high-fives and applause lined up outside their school.  As if they were on the starting lineup of the UConn Huskies rather than  elementary students entering Martin Luther King Junior School. Simultaneously, the same scene was recreated at Simpson Waverly School, a half-mile away.

Pastor Johnson says the idea was to get 200 Black men to the elementary schools to give kids an inspiring welcome that could foster them throughout the year.

“Most of the kids there are raised by single moms, and you can see that as they were being dropped off, a lot of them had their moms drop them off,” Johnson said. “I think that this is an opportunity for educated black men to go in and grab a young man and show them what it really means to be a black male.”