Imagine LL Cool J giving a rundown on the dinner specials while doing his signature lip lick. And asking what you wanted to order?

This Zane-like fantasy became a reality (in a PG-13 kind of way) when the Doin’ It rapper played waiter at Chris Paul’s Celebrity Server dinner to raise money for his family foundation Sunday.

Speaking of delegating like a boss. Chris was doing just that during a pre-game server session, on the proper way to pour wine.

For what not to do refer to former baller Sam Cassell. 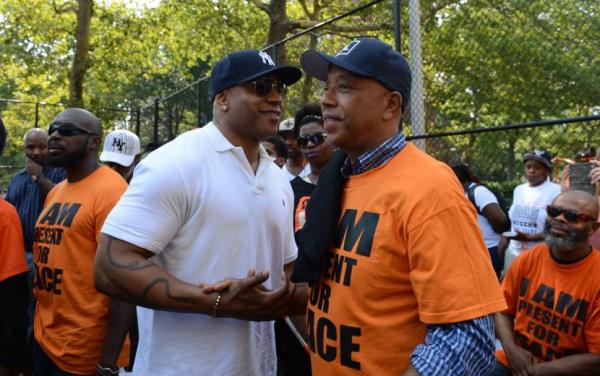 The two legends of the recording industry unify their star power to promote anti-violence programs that will protect youth. LL Cool J and Russell Simmons visited a Queens (where they both hail from) housing project hit hardest by the violence.

The GOAT rapper and hip hop mogul chatted with kids about their defense against violence: LIFE Camp, a group of local based-peacekeepers that act as “violence interrupters” when tensions begin to escalate. Their job is to lead raging teens in a more positive and peaceful direction.

After leaving their old stomping grounds they visited Rikers Island to offer encouraging words to incarcerated young people that could also benefit from the LIFE Camp. LL and Russell revealed their upbringings could have easily led them right where they are now. But, told them not to give up on the fresh start that awaits them later. Simmons preached to them about focusing on their inner thoughts.

It’s nice to see influential celebs being hands on with this overlooked issue. Kudos, guys.

Jennifer Hudson can add another award to her mantle, although I think this latest triumph means more to her than the Grammy and Oscar put together. She was honored at last night’s  “VH1 Do Something Awards” for her work as co-founder of The Julian D. King Foundation, an organization started in memory of her nephew that was murdered in 2008. The King Foundation, (started in 2011) provides school supplies and holiday gifts to low-income families in inner-city Chicago.

The songstress got understandably emotional when she took the podium. Check the video below to hear her tear-jerker moment.

Ladies Love James because he not only still looks sexy as a motha, but his heart is just as appealing. LL teamed up with New York State Senator Malcolm Smith to organize the annual Jump and Ball Tournament. This summer marks the 9th year. Kids in LL’s hometown of St. Albans, New York can participate in the month long tournaments that are sorta disguised as day camps, but unlike standard camps where parents spend hundreds of dollars LL’s Jump and Ball is free of charge. And offers a variety of activities for kids.

The iconic MC said his motivation to give back to his community was simple: He wished he had something like that growing up. Check the video below for why he thinks it’s so important to remember where you come from.