As often as its been said–kids can be so cruel–that more alarming and true the saying is. I think everyone has at least  one humiliating school memory they wish they can bury deep below the Earth’s surface. Imagine it constantly resurfacing like a dog digging up a bone. Nowadays kids have the harrowing dilemma of reliving those experiences over and over again through cruel text messages and threats on Twitter and Facebook. Cyberbullying isn’t a cute kids-will-be-kids type of behavior, it is unrelenting  hateful acts that occur through the Internet and over 25% of teens face those taunts everyday with damaging effects. 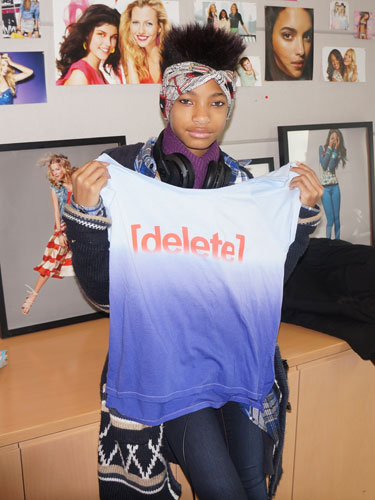 Seventeen Magazine teamed up with Willow Smith and other teen celebs to start an Anti-Cyberbullying Campaign to show young adults they aren’t alone in the fight against cyber bullies.  The Delete Digital Drama Campaign is a partnership between Seventeen Magazine and Facebook to survey young girls about their experiences witnessing or being a victim of cyber threats online. The campaign also includes a [delete] tee designed by  L’Amour Nanette Lepore sold at JC Penney in which proceeds go to STOMP Out Bullying, a national anti-bullying organization.

Willow, 12, is no stranger to this issue after being cyber bullied last year when she shaved her head. The topic became a firestorm on Twitter, Facebook and blogs. Not only criticizing her decision to rock a baldie, but Jada Pinkett and Will Smith’s laid back parenting style of letting their daughter be in control of her own body.

Jada took to Facebook this week to rant about young celebrities being just as vulnerable, if not, more susceptible to cyber bullies as well as the media and paparazzi:

Are we bullying our young artists?

How can we ask for our young stars to have a high level of responsibility if we are not demonstrating that same level of responsibility towards them?
This last week, I had to really evaluate the communication in regard to our young artists in the media. I was trying to differentiate cyber-bullying from how we attack and ridicule our young stars through media and social networks. It is as if we have forgotten what it means to be young or even how to behave like good ol’ grown folk. Do we feel as though we can say and do what we please without demonstrating any responsibility simply because they are famous?

If you Bl;nked: Another heartbreaking gun violence story reached the news this week. A 6-month-old baby was shot to death in Chicago. King Bey took to Facebook to express her outrage.

Why kill a 6 month your old baby? i dont understand why another human would do such a thing smh im praying for the little angel GUN VIOLENCE NEEDS TO STOP! its going way to far.