I wasn’t going to let April pass (can you believe it’s almost over?) without mentioning National Autism Awareness month. It’s a topic often overlooked–all the more reason to discuss it–unless you’re a part of this group; celeb moms that make autism awareness a priority everyday because their own children are affected.

Let’s start with Holly Robinson-Peete. The actress/daytime host started the HollyRod Foundation (with her baller hubby, Rod Peete) in 1997 to not only help people living with autism and Parkinson’s disease cope, but also honor her son and father-in-law experiencing the disorders, respectively. Since that time she has used every drop of her celebrity to talk about this misunderstood neurological disorder. From appearing on Celebrity Apprentice to hosting annual fundraisers, and using her star power to shine a light on missing autistic boy Avonte Oquendo.  Recently, she partnered with Stella and Dot to design a visionary bracelet where all proceeds benefit her foundation.

I wouldn’t change my son for the world, but I would change the world for my son.

Next is Gina, uh Tisha. Tisha Campbell-Martin discovered her son had autism at 18 months. The Martin star knew right away that something wasn’t right with her first-born. Acting on that mommy intuition she took him to a series of docs that kept diagnosing him as normal. Until, she met one that didn’t. Hear her inspiring journey below and what her non-profit, Colored My Mind does to help minority families experiencing the disorder. 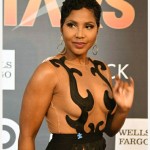 Toni Braxton’s freakum dress may have stole the show at UNCF’s Evening of the Stars (airing this weekend on BET) but if you look even closer…at THE WAIST you’ll see the speck of blue is her way of shouting out Autism Speaks. The same org that gave her tools she needed when her three-year-old son was diagnosed with autism. She showed her gratitude by becoming their celebrity spokeswoman and soon after a global ambassador.

Meela, R&B Diva and former member of girl group 702, established her own foundation–Parents Reaching Out to Understand Developmental Delays (P.R.O.U.D)–after discovering her son (with Musiq Soul Child) was autistic. Each year she holds an annual autism awareness event open to all families with autistic/special needs kids. This year’s get together will be this weekend.

Just to give some background on Autism. It’s a brain development disorder that affects speech and social interaction. The CDC reports 1 in 68 children are diagnosed with autism and 1 out of 42 boys get the disorder. Whereas, 1 in 189 girls are diagnosed in the U.S.