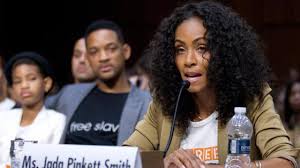 Human trafficking is the illegal distribution and sale of girls and boys for the purpose of forced labor and commercialization of sex through exploitation.

Jada tapped into her inner Diane Sawyer to interview, be interviewed, narrate and exec-produce CNN’s special report;  “Children for Sale: The Fight to End Human Trafficking.” The report is one-part “How to Catch a Predator” where a Georgia-based special victims unit detective races around the state to nab exploiters. Mostly found at the airport where most human trafficking is committed.

The second half. The most important half. The part that’ll make you want to lock your sons, daughters, nieces and nephews in their room forever–is when we meet the survivors. The teenager so desperate for friends she’s lured into the sex trade by a friendly face. Her void of companionship was filled with a series of johns.

“I had sex with almost 40 guys in one day,” recalls the teen when describing her abuse.

In 2012, Mrs Will Smith appealed to Congress to create tougher sanctions for human trafficking aka modern day slavery.

Jada says she was motivated to do something when she saw herself in all the human trafficking survivors she met. Just as they were vulnerable to fill a void, so was she, pointing to her absent father as the reason. Good thing Big Willy was there to love and not exploit her. A wish she has for all the survivors.

“They have so much to offer humanity if we just give them a chance.” says Jada.