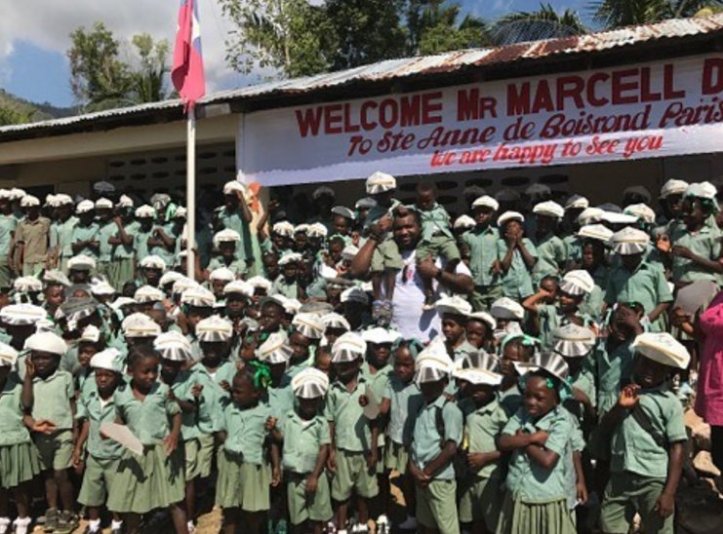 Buffalo Bills tackle Marcell Dareus wanted to do more than donate $25 Gs to Hope for Haiti charity. The NFLer wanted to see how it was spent.

So he hopped a flight and landed in his father’s homeland this week. Where he visited orphanages, schools and a hospital, reports AL.com

The Alabama native got a warm welcome from the island nation that is still reeling from October’s Hurricane Matthew and the powerful 2010 earthquake that left thousands homeless and dead.

“I’m happy that I’m able to partner with Hope for Haiti, which is giving me the opportunity to meet and understand the people who are benefiting from my support,” Dareus said . “… I love giving back, especially to kids in need, but this is extra special because I’ve never been on a trip like this before. The Haitian people have seen hardship after hardship with the earthquake and then the hurricane. Being able to meet with them and show them that I care about them is really important to me.”

Hope for Haiti charity–that aims to improve the lives of Haitian children through education, health care, water and infrastructure–was happy to see their philanthropic partner in person.

“We are inspired by the generosity of Marcell Dareus and the Dareus Foundation for their investment in the Haitian people,” said Skyler Badenoch , the CEO of Hope for Haiti. “Without the support of investors like Marcell, Hope for Haiti’s work would not be possible. We are so grateful and we look forward to making an immediate and lasting impact together.”

The service-oriented sojourn already had a major influence on the star player for his father’s roots there. Marcell’s dad died before he entered the NFL.

“My dad grew up in Haiti, and I always hoped I would make it there some day,” Dareus said . “Although my dad died when I was younger, I’m lucky to have other family here in the States that have told me stories since I was a kid about life in Haiti. Being in a position to not only visit, but also make a donation that will really impact Haitian kids and their families is a great feeling. I know it will be an eye-opening trip.”