“My name is Chance the Rapper. I’m from Chicago, Illinois. I’m here to make sure you all stay woke and vote,” said the omnipresent Chicago rapper from the stage of a concert and voting drive Monday at the Petrillo Music Shell in Grant Park.

The show was announced on Friday as a rooftop concert at the Virgin Hotel with his new non-profit SocialWorks, and featuring local artists, in a youth voting drive effort.

By Monday, the day of the show, the rooftop at the Virgin was traded for the Petrillo Music Shell in Grant Park to accomodate the thousands who RSVP’d on Facebook, retweeted to get the word out on Twitter, and the friends and family they brought with the them. 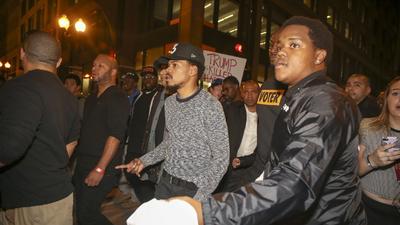 Around two hours into the event Chance the Rapper took the stage. “I got my city doin’ front-flips!” He exclaimed, as the opening of his “Angels” was instantly taken over by the crowd.

He told the crowd he wanted them, the collective “us,” to show people that Chicago’s youth want to make their voices heard, finishing his set with “No Problem” and “Blessings (Reprise)” before he thanked everyone for being part of the event.

Earlier in the afternoon’s mini-festival, after a set to warm-up the early crowd from DJ OddCouple, Chicago’s Eryn Allen Kane performed a short set featuring her own track “Honey,” as well as a showstopping cover of “Shout” and The Jacksons’ “Shake Your Body (Down to the Ground).”

Chicago rockers Twin Peaks hit the stage next with a set that included “Boomers,” (in which bassist Jack Dolan threw in a colorful lyric about Donald Trump).

#PressPlay: Last night in Chicago at #ChanceTheRapper 's free concert, which was held to encourage the youth to vote pic.twitter.com/tNOHmR5qZF

“Go out and vote tonight or tomorrow! Go out and vote, it counts!” Twin Peaks guitarist/vocalist Cadien Lake James implored before leaving the stage.

“It’s so important for you to make your voice heard,” he added. “Us as the youth, as the youth of Chicago, are all gonna march to the polls together and vote!”

But the big reason the crowd turned out was Chance the Rapper, who emphasized Tuesday’s election as one of the most important of our lifetime, the 23 year-old stood on stage simply as an American with a passion for doing his part.

“Thank you to all the people who want to be a part of how democracy works and want to make their voices heard,” he said.

“You’ve got the spirit. If you wake up in the morning and feel like you’re just one person … man, you’re so much more than that!”

With that, Chance, along with organizers from Black Youth Project 100, led the thousands of concertgoers on a march to the polls.