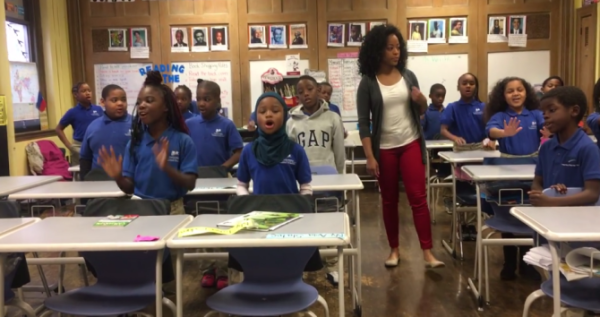 Jasmyn Wright is the teacher every parent prays for–inspiring, encouraging and devoted to childrens’ ability to succeed.

Lucky enough for the City of Brotherly Love parentals, the 27-year-old landed at Frederick  Douglass Elementary in Philly. Where her third grade class is taught to “push through” their obstacles daily by reciting this catchy mantra:

“What if it’s too hard?” the teacher asks her students.

“I’m gonna push through!” they respond.

“What if it’s too tough?” Wright asks.

“I’m gonna push through!” they answer.

“What if you’re just too dumb?” she asks.

“That ain’t true!” they exclaim.

“What if you’re just too young?” the teacher asks.

“That ain’t true!” the students answer.

“I can do anything I put my mind to!”

The Spelman alum’s video of positive affirmations has been viewed over three million times on Facebook.

“Teaching my 3rd grade black and brown babies to #PushThrough today,” she wrote in the video caption. “Due to unwelcoming, unsettling, and uncomfortable election results, this was our lesson for the day.”

Wright, a poet and spoken word artist, told the Root that molding the young, gifted and black requires boosting their self-esteem. Even more so in light of a Trump presidency.

“With the election that went on, they were more troubled and they were upset,” she continued. “[So I thought,] yes, this is true, this has happened, but that doesn’t stop us from pushing through. We still have a calling, we still have a purpose, we still are made to leave an imprint in the world, and we cannot give up because of whatever happened.”

Which is why the charter school teacher is also helping kids outside the classroom by starting a nonprofit, I Am My Sister’s Keeper, with two friends. Just like POTUS has My Brother’s Keeper to focus on mentoring young men, Wright wants to raise up girls aged 12 to 18.

Let’s all bow our heads and pray for more teachers like Wright.