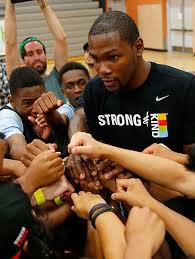 Kevin Durant is the Golden boy of Prince George County.

Not just for that championship rock on his finger.

The intense (decade long!) program is designed for test prep, tutoring and matching students with colleges.

High school students also to have to commit three to five hours a week after school and summer school.

Kevin Durant’s investment will bring College Track program to the East Coast for the first time. Centering on Maryland and Washington D.C. area.

But of course his heart lies with the first College Track program in Seat Pleasant, Md.

“This hits home, because it’s right in the neighborhood where me and my buddies lived,” said Durant,who opens the center later on this year.

The College Program, started 20 years ago in California by Powell Jobs, has helped over 3,000 students in nine centers in California, Louisiana and Colorado.

Durant, who got involved in the College Program early last year, says his ultimate goal is to level the playing field.

“We didn’t have the resources to get our minds thinking about the next level,” Durant told The Post. “I want to do my part, whatever it is. If College Track students want to be the next Steve Jobs or the next influencer or the next tastemakers, they can get there.”

No doubt with Durant’s big boost.