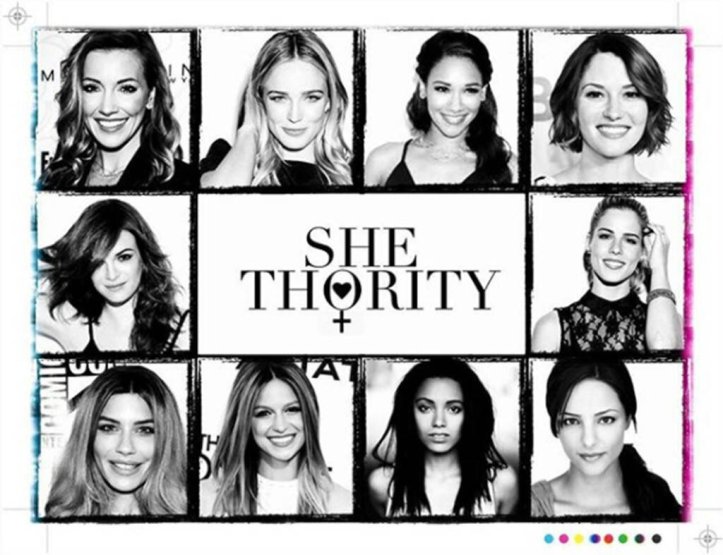 Y’all are on notice: Shethority is in full effect!

The online women’s collective campaign, launched late last year, is “a positive place for women and the feminine to inspire, empower, and share,” their Twitter bio reads.

Shethority is the brainchild of The Flash’s Candice Patton and her fellow female CW superhero Caty Lotz of Legends of Tomorrow.

The two besties birthed the idea for creating an encouraging platform on a hike in Vancouver.

Candice told E! News it was important to have a meaningful dialogue with fans.

“We were just talking about these conventions we go on a lot, and you know, we meet fans, we sign autographs, we take pictures, and we go home. A lot of our fans are young, they’re women, they’re women of color, and we don’t really get to have a dialogue with them in that medium at a convention. It’s two minutes and they’re ushered on and the next fan comes up. And we saw a desire from them to want to talk about seeing us on screen and the importance of being a woman and empowerment, so we wanted to create a place for young girls, women, and boys to speak on female empowerment.

Shethority’s Instagram is filled with empowering videos about how to handle male-dominated workplaces and boosting confidence and self-esteem.

The campaign has evolved into selling Shethority t-shirts and sweatshirts with the “I Got Your Back” slogan along with the CW actresses faces.

Proceeds of the shirts will go to Girls Inc., a non-profit that promotes mentorship and support for girls 6-18. The remaining funds will go toward growing the Shethority space.

Candice told E! News that she wants to see Shethority grow into an even bigger movement.

“I hope it’s a huge nonprofit. I see mentorship programs where women in successful careers, whether it be film or TV or doctors or lawyers or people in STEM, reaching out to some of these young girls and being able to mentor them through Facetime or emails or short texts.”